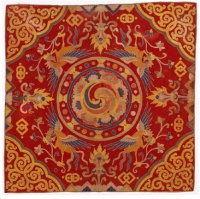 In Bhutan, a mountain kingdom that lies between Tibet and north-eastern India, throne covers such as this were placed atop the temple cushions used by high lamas. Appliquéd by Bhutanese artisans with cloth imported from India, China or Tibet, the covers also served the king during his worship and rituals in the temple. Thrikhebs could be found in the homes of the Bhutanese elite as well.

This example consists of a number of appliqué designs over a red ground cloth. Most of the motifs found here are Buddhist, including the four representations of the phoenix and the lotus petals that form the center of the design.

An interesting detail in this particular appliqué is the tightly spun wool cord that forms the border of the different pieces of colored cloth. The cord creates the optical illusion of a third dimension, lending greater depth to the design of this thrikheb.