Egypt is considered the origin of the Mysteries because of its millennia-old temples and pyramids.

In esoteric circles it is often regarded as the cradle of hermetic mysteries and magic. In such hermetic circles the mythical figure of the "Hermes Trismegistos", which is known not only through the "Tabula Smaragdina", reappears again and again.

In gnostic the "Corpus Hermeticum" he speaks to his pupil "Did you know that in Egypt everything is modeled after heaven ...

But all that concerns actually more the newer hermetical view of Egypt. The ancient egypt culture fascinates through its hyroglyph language, through its pyramids and temples and crowned pharaohs and gods.

In the center of the many pyramids stands the Cheops pyramid. Until today it is not quite clear how the many 50 tons of heavy blocks of alone the "long hall" could be transported at that time. This pyramid was not a burial site but a symbolic temple of inauguration.

The egyptian adepts knew these 22 steps of the path as the path of Thoth. The Cheops Pyramid symbolized this path and also the lesser magic path of Heka.

It was assumed that the 22 pictures of the later Tarot come from Egypt,evtl. from the Mamluks, but the gypsies have their proven genetic origin in India.

The  sections of this  twentytwo-stepped path were represented in the great pyramid in form of the gears and chambers :

The neophyt must strain himself during the first two development steps until he passes the entrance of the pyramid ( corresponding to the Yama of the Raja Yoga or the Introspection). The choice of grace between takes already part on step 4.

On step 6 a part of  his forces tames the lower forces and the other right part has evolved into the higher forces (branch).

The end of step 14 leads once again almost vertically down into these involutionary powers of the unconscious, the underworld.
The horizontal branch with the small chamber ('step 14') before the long hall symbolizes the path of the occult 'white magic'(Heka)  and stands in a special relation to the Sirius. The white aetheric magic leads far but not so high.

Similar occult capacities appear on the spiritual path first on the step 18.

The long hall symbolizes the long path of the step 15(long lunar phase).

The steps 16 and 17 are again a short however tedious phase.

The step 18 is  symbolized by the rear upper "king chamber" : It stands in special relation to Orion. Here stands the preserved initiation coffin.

About that yet four further small cavities exist.

After this initiation the developement goes only higher. But it was not possible at that time to develop higher.

Besides to the myth of the travel of RA through the underworld and the rebirth of the RA (papyrus Ani), is especially the myth of Osiris  well known :

Osiris is murdered by Seth (box with lead-layer : Saturnus), and he must go down into the underworld(13.2). Out of its seed, Horus (Heru) is born.

Isis, the wife and sister of Osiris, brings his son Horus secretly to birth and lets Horus drive down the Nile in a basket, where he is found at the Nile bank.
Isis succeeds to reawaken Osiris (13.4). Seth notices the revival of Osiris and kills Osiris again and fragments him, whose new revival Isis does not succeed entirely, because the phallus is missing.

Osiris remains in the end as ruler of the underworld(15). 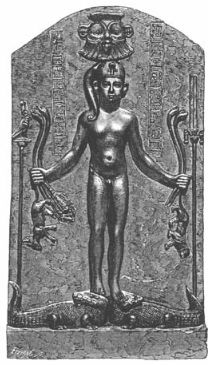 In other words: The Adept or Neophyt passes through the steps 13 - 15( mystical death and rebirth - the 'divine Child' or Jivatma is born). After that the subconscious forces are permanent under his control.

Horus, the spiritual power in the adept, can grow and get on with the process.

Set is represented as a divinity of destruction. He is the dämon on the wheel of tarotcard 10. He is also the enemy of Apophis, the big snake of the chaos.

He is a brother and also an opponent of Osiris, whom he kills later and takes in its place, but he is again displaced of the throne by Horus, the son of the Osiris (end of the step 14), whereby two empires come into existence(step15).

We find this "fratricide" in other manner also in the story of Kain and Abel. The opposing powers of Set and Osiris determine the powers of the wheel in an early stage .

Apophis (cf.: kopt. Giant, Ägypt. Snake demon), who lives as a "big snake" in the darkness. He the embodiment of the dark material forces opposed the heavenly God of light.

The sun must fight daily against Apophis.
Evenings during sunset, Apophis comes threateningly near to the sun ship before its entrance into the underworld .and he must be fighted from the bow of the ship by Ra/Seth so that the red blood of the Apophis colors the sky.  In the mornings during sunrise when the ship comes out of the dark underworld the same battle takes place. (I.e. the symbolism of the change of the snake power into the powers of the wheel).
(Fludd : Utriusque Cosmi Historia, Oppenheim ; Der okkulte Mensch - Dies Microcosmos) 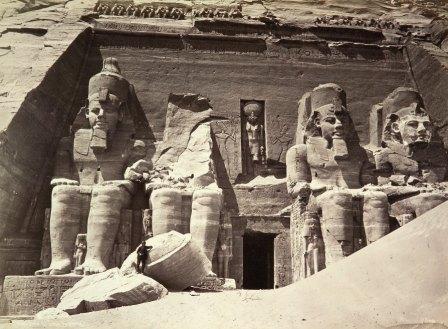 Over the Mysteries of lower Egypt, one should not forget Abu Simbel, whose rock temples were officially consecrated to the head Gods of higher Egypt and lower Egypt, Amun-Re, Ptah and Re Harachte as well as to the Pharao himself whereby to note is, that the Pharaos were usually high initiated. In Abu Simbel a group of eight Osiris statues is to be seen among other things, that carry out a heart handle as known from Napoleon. They indicate the difficult 'path of the heart', that is known in Asia as the master type of the Mahachohan.

Already Rudolf Steiner interpreted the ancient mysteries in his books " Christianity as a mystical fact " (if also mixed with many errors) and in Egyptian Myths and Mysteries.