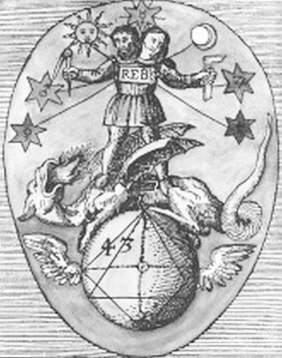 Geryon (griechisch Γηρυών, also Geryones and Geryoneus) is the son of Chrysaor and the oceanid Kallirrhoë (Hesiod, Theogony 287, Stesichorus Geryoneis Frag, Apollodorus 2.106, Hyginus Pref) and a grandson of Medusa and a nephew of Pegasus.

Geryon is often portrayed with three swords and shields and sometimes also winged.

Geryon lived on the island Erytheia ('Redland', Land of the  Afterglow ) .

His herd of red bulls was guarded by the shepherd Eurytion and the two-headed dog Orthos ('dawn'), a brother of Kerberos (or also guarded of Kerberos himself), who was placed in the world by Typhon (Typhoeus).

Gerion is here just a symbol for the Rebis, which has also grown together, 'the red lion' as whom Heracles 'kills' him,